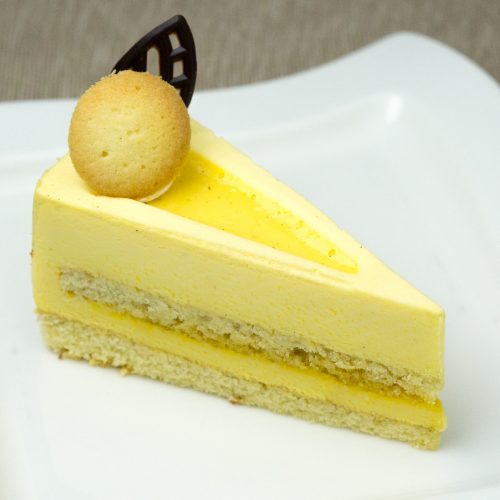 Mix the margarine and powdered sugar until it is creamy, then add the egg yolk one by one. Whip the egg white with the granulated sugar until they form stiff peaks. Mix the whipped egg white with the creamy margarine, then add the pre-mixed dry ingredients. Bake 2 round sheets on baking paper using the metal cake ring found in the box. One weighs 230 g, the other 180 g. Bake it at 230 °C for approximately 10-12 minutes.

Boil ¾ of the milk with the sugar and butter.
Mix the egg yolk with the remaining milk, boil it down on the gas while continuously stirring.
To finish, add the sugar previously mixed with gelatine and cook for 1-2 more minutes. If overcooked, it needs to be shaken.
After it cooled down, add the vanilla paste (or housewives should cook the bourbon vanilla bean in the milk)

Prepare the base cream, add the hot gelatine and finally the whipped cream. The consistency of the cream is optimal when it is slightly soft, almost liquid.
This way it easily takes the shape of the silicon mould.

Use the silicone mould release spray, fill in half of the whipped cream. Cover the silicone parts fully. Condense.

Then put on the smaller sponge sheet, sprinkle both sides with the vanilla syrup. Spread onto the remaining cream on top and cover it with the larger sponge sheet.

Chill in a freezer at -18 ° C for 2 hours.
After defrosting, pull off the silicone mould and cut off the rings. Fill the holes with the pre-cooked and cooled mousse.

Push a rose-shaped cream icing on cake slices.
Place a Windhab figure on each slice.
Decorate it with chocolate, use chocolate shavings at the side, if you like.

Check out our How-to page for a quick revision of the technology.

You can visit our Youtube Channel for videos as well, or check the below videos which shows a procedure of freezing technology and one of baking technology.

Check out our How-to page for a quick review.

You can visit our Youtube Channel for videos as well, or check the below videos which shows a procedure of freezing technology and one of baking technology.

Recipes with the same difficulty level

We use cookies to ensure that we give you the best experience on our website. If you continue to use this site we will assume that you are happy with it.Ok